Previous Article
Role of the Proteasome

Apoptosis is a regulated cell death process that occurs under physiological and pathological conditions and results from the activation of caspases (members of cysteine protease family that are responsible for activation of cellular proteases and endonucleases). Apoptosis is executed through two main pathways: the death receptor (DR) pathway and the mitochondrial pathway. The DR pathway is activated by ligation of members of the tumor necrosis factor (TNF) family to DR on the plasma membrane triggering caspase activation. In contrast, the mitochondrial pathway is regulated primarily by members of the Bcl-2 family, which includes both pro-apoptotic and anti-apoptotic proteins. The ratio between pro- and anti-apoptotic proteins determines susceptibility of cells to death signals.46

Apoptosis is avoided by myeloma cells through a number of mechanisms. High proteasome activity prevents the unfolded protein response from activating apoptosis.42,47 Interactions with the bone marrow stromal cells induce the secretion of cytokines and growth factors. These interactions lead to the activation of NF-kB and Notch-1, as well as the secretion of soluble factors such as TNF-a, TGF-β, lL-1β, bFGF, VEGF, and IL-6. Increased levels of expression of Bcl-2, Bcl-xL, and Mcl-1 have been linked to multiple myeloma cell survival and resistance to chemotherapeutic agents. In multiple myeloma there is higher expression of the anti-apoptotic factors Bcl-2 and Mcl-1 but not of Bcl-xL, and there is a lower level of expression of Bax.46 The figure shows that by shifting the balance toward anti-apoptotic Bcl-2, Bcl-xl, and Mcl-1, and away from pro-apoptotic factors Bax, Bak, Bid, Bcl-xS, Bad, Bik, Puma, Noxa, and Hrk, myeloma cells avoid caspase activation and apoptosis.46-48 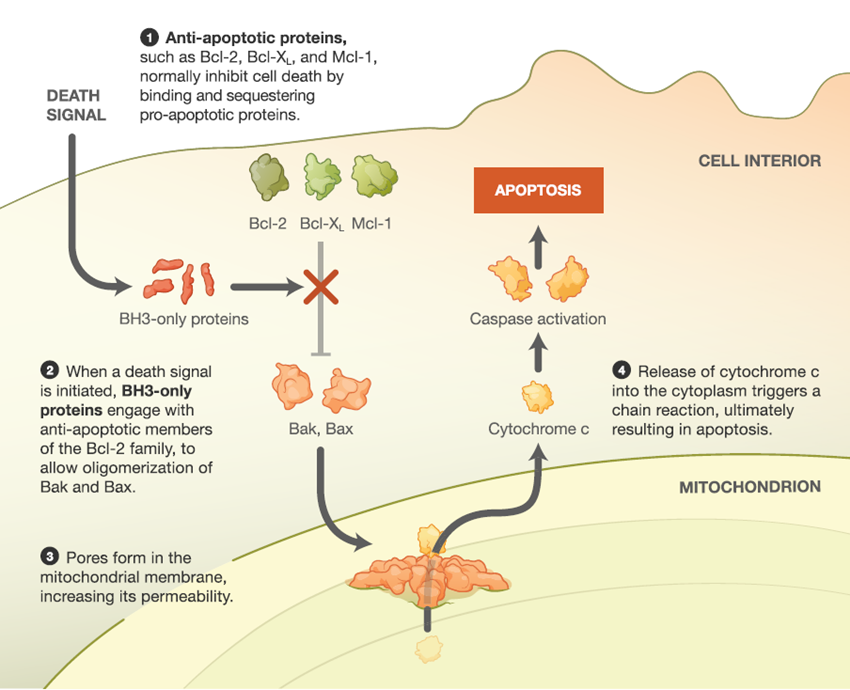