Next Article
Role of the Proteasome

Multiple Myeloma is a mature B-cell neoplasm characterized by dysregulated clonal expansion of malignant plasma cells.6 This transformation of healthy to malignant cells results in a change in the cell surface molecules that allows for identification of myeloma cells. Some of these markers include upregulation of key molecules that are believed to alter myeloma function. Examples of cell-surface molecules that are expressed in plasma cells but can show increased expression in myeloma clonal-cells include BCMA, CD38, and CD138.30-32

B-cell maturation antigen (BCMA) is a member of the tumor necrosis factor receptor superfamily that plays an important role in regulating B cell proliferation and survival.33 BCMA is expressed on the cell membrane of normal and malignant B lymphocytes and plasma cells, but not other normal tissues.34,35 When bound to its ligands BAFF and APRIL, BCMA delivers pro-survival cell signaling.36 BCMA is central to the survival of multiple myeloma cells.33 BCMA, BAFF, and APRIL are all expressed at significantly higher levels in patients with multiple myeloma than in healthy individuals.33,37 Overexpression leads to upregulation of anti-apoptotic proteins and the survival of multiple myeloma cells.33 Upregulation of BCMA also correlates with disease burden and poor prognosis in multiple myeloma.33

CD38 can be used to identify both normal plasma and myeloma cells, is a marker of cell activation, and is an important regulator of cell adhesion and signal transduction.30 CD138, a heparan-sulfate coated glycoprotein, is important for adhesion and survival in the BM niche.30,38

CD56, a neural cell adhesion molecule, is not expressed in normal plasma cells, but can be highly expressed in MM cells and may play a role in prognosis.30,39 Conversely, CD19 is downregulated in most MM cases. Pre-clinical data suggests the loss of CD19 could contribute to the proliferative advantage of malignant plasma cell clones in MM.30,40 Other key surface markers are listed in the figure below.30 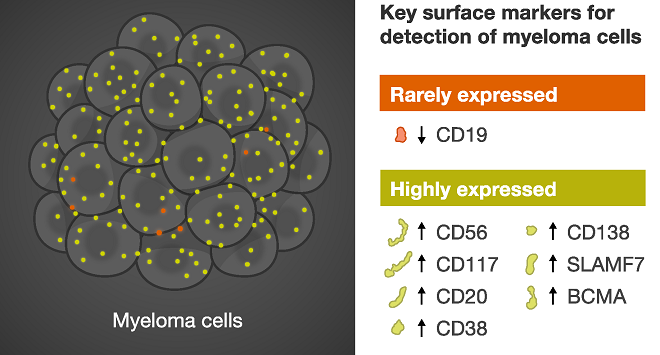 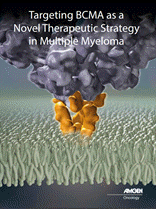 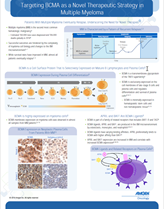 
Next:
Role of the Proteasome