Next Article
Relapse and Heterogeneity

What is multiple myeloma?

Multiple myeloma (MM) is a B-cell malignancy in which abnormal, clonal plasma cells proliferate and accumulate in the bone marrow. Myeloma cells disrupt normal bone marrow function and invade the surrounding bone causing bone destruction.5 The interactions between myeloma cells and stromal cells in a specialized niche in the bone marrow facilitate cell growth and disease progression, which can lead to anemia, thrombocytopenia, bone disease, hypercalcemia and renal impairment.5-7

Myeloma cells typically harbor one or more mutations in the genes responsible for immunoglobulin production. Additional mutations can develop in a clonal fashion, resulting in a heterogeneic population of myeloma cells in the bone marrow.8 Myeloma cells produce and secrete significant quantities of the abnormal antibody component, monoclonal protein (M-protein). Excess production of M-protein causes accumulation in the bone marrow and subsequently the bloodstream followed by the urine. In addition, abnormal monoclonal molecules can adhere to each other and/or other tissues such as blood cells, blood vessel walls, and other blood components, which can reduce blood flow and circulation.3

Symptoms that patients may experience9,10 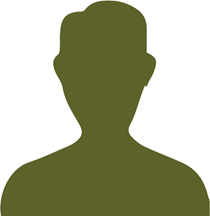 Loss of appetite and weight loss

Multiple myeloma is the second most common blood cancer, with close to 176,000 new cases diagnosed globally per year.1,2 Despite increased availability of novel agents, the disease is characterized by a pattern of recurrent relapses and remains incurable for the majority of patients, leading to approximately 117,000 deaths per year, worldwide.2,11,12

In the United States, it is estimated that in 2021 there will be approximately 34,920 new cases of myeloma and an estimated 12,410 deaths from this disease.1 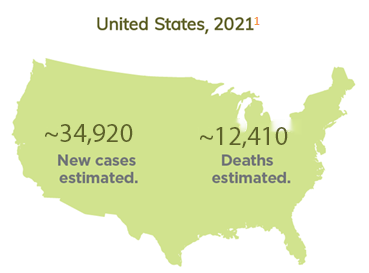 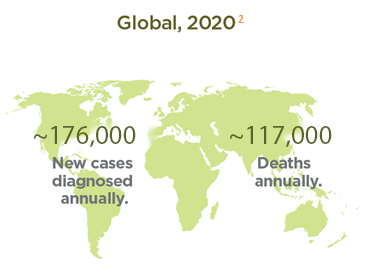 CRAB criteria are used to help identify Multiple Myeloma. Myeloma is defined by the presence of monoclonal protein and one or more CRAB features and/or indicators of organ damage:5

Next:
RELAPSE AND HETEROGENEITY

You are now leaving MyelomaRevealed.com

Please be aware that the sponsors of thsi site are not responsible for content on the site you are about to visit.