ROLE OF THE PROTEASOME IN MULTIPLE MYELOMA

Home > Role of the Proteasome

The proteasome is an important regulator of normal cell function41,42

The ubiquitin proteasome pathway represents the major pathway for intracellular protein degradation.41 More than 80% of cellular proteins are degraded through this pathway, including those involved in processes such as cell cycle progression, apoptosis, DNA repair, and protein quality control.43 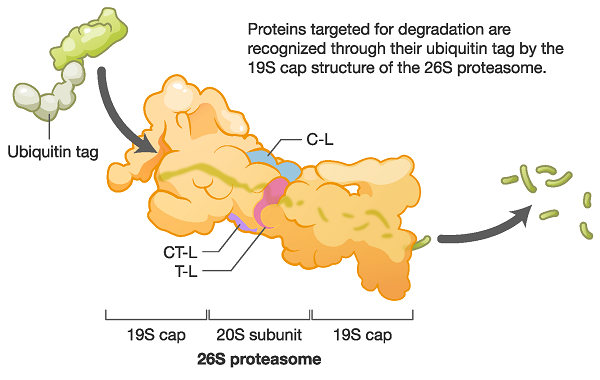 Polyubiquitin chains target the protein for degradation by the 26S proteasome. Ubiquitin molecules are removed and the protein is unfolded and fed into the inner 20S catalytic chamber, where the protein is cleaved into small peptides using 3 main catalytic activities: chymotrypsin-like (CT-L), trypsin-like (T-L), and caspase-like (C-L).45

Due to excess production of immunoglobulins and high rates of protein synthesis, myeloma cells have increased demand for protein turnover.41,43 A stress response pathway called the unfolded protein response (UPR) ensures that plasma cells can handle the proper folding of proteins and prevents the accumulation of misfolded proteins. In myeloma cells, the burden on the UPR pathway is increased, thereby increasing the need for degradation of rapidly accumulating misfolded proteins by the proteasome.43